Since safety is of paramount importance to electric utilities, so should HDE’s V-Watch personal voltage devices be required personal protective equipment for every lineman. V-Watch is a device that provides visual and audible alerts of the dangerous presence of voltage at 2400 volts or more at a distance of 7-10 feet away.

V-Watch is worn around the neck of the lineman, usually during storms, where the worker may not be aware of the presence of downed power lines. Powered by a single 9 volt battery that lasts about a year, the V-Watch is always on with no power switch. Voltage sensing can be blocked by closing the patented protective case. Many utilities and contractors throughout the US require use of the V-Watch. Shouldn’t yours?

Cree is proud to introduce the best LED security light on the market today. Cree has designed and built the lightest, smallest, brightest security light with the longest warranty! The light is called the RUL. It weighs 3.5 lbs, is 50 watts with 5500 lumens and has the same pattern as the high pressure sodium lights prevalent in the marketplace for years. There is no driver to replace and nothing to repair. It has no globe but anyone’s globe will snap on in a jiffy. A terrific added value is the warranty. The light is guaranteed for 10 years! Give us a call and we will show you why we are so proud of this innovation.

From rural street lighting to storage facilities, the RUL Series outperforms incumbent technology by providing superior illumination and economic performance for municipalities and utilities resulting in expedient payback with less than half the wattage of comparable traditional solutions. 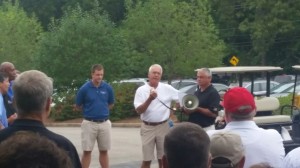 Utility Specialists was proud to be a part of the recent Kylan Warren Charity Golf Tournament. Along with Schneider Electric as the Master Sponsor, USI fielded two teams of golfers and finished a respectable next-to-last. Ted Warlick, Schneider Electric Regional Manager spoke about the honor to help both The Grady Health Foundation and The Georgia Power Family House.

Utility Specialists, Incorporated is pleased to announce the hiring of Lance Martin for our Georgia Public Power territory. Lance will be calling on and promoting our products at the cooperatives and municipals in Georgia under the guidance of Chip Kanour.

Lance comes to USI most recently from an outside sales position in the electrical Commercial/Industrial world. He also has experience with inside sales and with line construction having worked previously with Pike Electric and UTEC Construction. Lance is a graduate of the University of North Georgia (Go Nighthawks!).

Lance served as a Sergeant in the US Army and was stationed in Afghanistan. He and his wife April live in Gainesville, Georgia where he will be working from his home office. 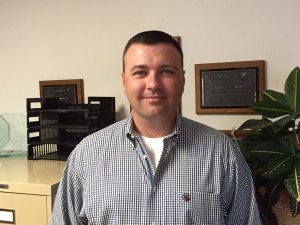 Please join us in welcoming Lance to his new position with USI.

In 1957 Rolla Beck, Jr. started his agency business, Beck Sales Company, with just a few lines, payments on a new car and he and his wife Sarah Alice expecting their third child (Murray). He worked out of his car and his home in Birmingham until he could afford an office. Rolla was blessed with a special way with people and a dedication to integrity that helped him grow his business and he soon added new lines. We are proud to continue representing some of those early lines today, including Shakespeare since 1963.

Rolla’s biggest line in the early days was Bethea Company and he and Malcolm Bethea made and sold the first commercial 500kV transmission line assemblies for the Tennessee Valley Authority.  Rolla was always interested in manufacturing products as well as selling them and he found his opportunity with corona shields for EHV, while working on this first line. The story goes that he and Malcolm were in a meeting with TVA engineers discussing the unique requirements of a cross country 500kV line when the subject of corona control came up. As they discussed the fact that this was an untried concept and corona was going to be a factor, they commented that no one had ever produced corona shields on a large scale and they would need to find someone to test and fabricate hundreds of them for this line and future EHV projects. Rolla quickly said that he could make them. The chief engineer for TVA, with whom Rolla had a great relationship and had done much business, said “Rolla, you don’t even know what a corona shield is!”

Rolla replied, “You are right, but I will know everything about them soon and I will manufacture them”. And he did. Beck Sales Company soon became Beck Sales and Manufacturing Company and Rolla made thousands of corona control devices over the next 25 years for every American manufacturing company that provided EHV equipment.
As the manufacturing business grew, Rolla added sales people to the agency staff and continued to prosper in both sides of the business. In the 50’s and 60’s there weren’t many manufacturers’ agents but the days of GE, Westinghouse and Joslyn supplying “everything on the pole except the man” were coming to an end. As new companies entered the electric power delivery market they sought new market channels and some agents prospered. Rolla found himself calling on customers from Consolidated Edison in New York to PG&E in California. As a bright and talented salesman, always looking at ways to leverage the best asset he had, which was his time, he bought an airplane to cover more territory quicker (and to have some fun, because Rolla Beck was a great salesman, but he was an even greater fan of a life lived to the fullest.) Rolla was often the top salesman for the companies he represented and he and Sarah Alice enjoyed flying to factories and socializing with their owners….and planning to increase sales every year!
A big change to the agency came in 1969 when Bill Logan, who had been Bethea’s sales manager, came to work as Beck Sales Company’s manager. Bill was quite experienced in the power delivery business and had started his career, as many sales folks in the South in those days did, at Anderson Electric right outside Birmingham. Bill brought relationships and contacts with many manufacturers across the US and soon began to sign up additional lines for the agency. One of our biggest lines today came from that time of growth: Durham (1971).

Starting in the late 1960’s Reb Beck, Rolla’s oldest son, was working as a laborer in the plant and then for Bill during summers away from college and law school and began to enjoy the customer sales side of the business. After graduation and his time in the Army, Reb came to work full time for the agency in 1972. After a few years Bill moved to help start up a new company in Birmingham and again with people with Anderson Electric roots. As Rolla’s manufacturing business grew, he spent less time on the agency side and Reb began to buy the company from Rolla in the mid 1970’s.

In the early 1980’s Reb and Joe Thornton and their wives were friends from church and had dinner most Saturday nights preparing for the Sunday School lessons Reb and Joe taught at Independent Presbyterian Church. The friendship grew to the point that they began discussing working together and Joe took a week of vacation from the Birmingham Police Department, where he was a Sergeant, to travel with Reb to see if he really wanted to do agency work. In May, 1981 we were blessed to have Joe join the company and he continues to be our major producer today. During the eighties we signed contracts to represent Seeco (1980), Valmont (1986). Both lines are major factors in our success today.

In 1986 we changed the name of the company from Beck Sales to Utility Specialists, Inc. and we gained our hardest working salesman, Murray Beck. The industry and community lost a fine servant with the sudden death of Rolla Beck in 1988 from a heart attack. He is missed every day and will never be forgotten.

We were able to move forward after Rolla’s death, as he would have wanted and we acquired our present location, in Vestavia Hills, south of Birmingham, in 1989 and we began our great relationship with Electromark in 1991. Our dedicated office manager, Nancy Hopkins joined us in 1992. As our agency continued to grow we added sales people. Our Tennessee operation added another person and continued to grow with new lines as well. In 1997 we signed up with the AZZ group of companies which has been one of the fastest growing lines we have represented and a great success story. We expanded the office space in 1999 to accommodate the growth and for more Inside Sales staff. That was also the year we found the hardest working man this side of Murray, Chip Kanour. Chip has been a tremendous success in the Georgia market and has brought much energy to USI. Some would say his motor never stops running!

In 2000 we entered the Florida market and have found it, like the Southeast, to also be a great place to do business.

While we have had our share of gaining and losing lines through mergers and acquisitions, we are thankful that USI has continued to grow and serve the market with the same dedication and integrity that our founder Rolla Beck established over fifty years ago. We thank you for our opportunities and look forward to the future. We know that if we stick with the corporate values Rolla held throughout his life we will continue to be on the right track.